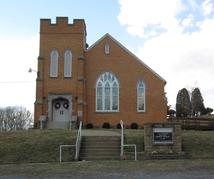 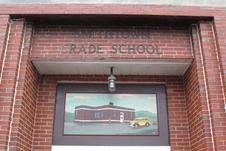 Though the village has had several schools in its day, it has remained close to the same site that it occupies today. The most recent school was built in 1939 and for many years was called the "Stony Point School" and was later changed to "Smithtown Grade School." It now serves as the Smithtown Community & Senior Center.

On down Route 73 a mile or two is the Pisgah United Methodist Church. The church celebrated its bicentennial year in 2013. The cemetery on the hillside there has several historical markers. Some of the early families in this community were the Jolliffes, Steeles, Watsons, DeVaults, Kramers, Malones, Mundells, and Hutchinsons.

[Information courtesy of Memories of Yesterday compiled by Frank Spevock, 1965.]

Smithtown is a community located on Old Route 73 in Monongalia County, West Virginia. In 1802 Richard Smith settled at what is now Smithtown and the area was laid out in lots and streets June 9, 1806 by this pioneer settler. James G. Watson settled in the Opekiska area near the same time and one of his three sons, James Dent Watson, built the old brick home (L-shaped and Georgia style) in 1834 that can be seen near Route 73. It is said that this home was constructed upon the same site where Richard Smith made his first settlement.

Smithtown is rich in West Virginia history. Starting in the 1830s, a stage coach line for freight and passengers established a stop here in its runs between what is now Fairmont and Morgantown. It is said that the route generally followed that of the present state highway that goes through the community. White Day Golf Course came into being during the middle 1920s and Bunner's Dairy was established in 1937 but has since closed.